Title: To never bow our heads ever again
Topic: police
Date: 2014
Source: Retrieved on February 20, 2014 from www.non-fides.fr
Notes: Call for a demo to put an end to the police occupation of our lives in Paris, France. The poster is here: www.non-fides.fr
Plain PDF Booklet EPUB (for mobile devices) Standalone HTML (printer-friendly) XeLaTeX source plain text source Source files with attachments View history Add this text to the bookbuilder Select individual parts for the bookbuilder

To never bow our heads ever again

Whether it is directly or indirectly, the Police-Justice-Prison trio is part of our lives. Who has never tasted their handcuffs or their trials, who has never dealt with prison or detention centers? Who has never felt their threatening presence? There is no way to deny that poverty always associate with state domination. In the North-East of Paris and in the Parisian Eastern suburbs just like anywhere else, who can ignore the parades of cops swaying their shoulders, in plain clothes or in uniforms, whatever their names (BAC, BST, Correspondants de Nuit or security guards for landlords, for the city council, for the public transportation company), scrutinizing the actions of everyone, checking IDs, with a mistrusting gaze, with the blessing and support of judges and prosecutors whose job is to lock us up? No job is below any other, we can hear sometimes. But nothing is further from the truth when some individuals chose, to earn their lives, to stop us from living ours.

But repression is not only uniforms and judges. It’s a whole way of thinking that we have come to internalize, from the nursery to the grave. The citizen, this police assistant who chooses our masters at each election, is the first barrier against the revolt of the dominated. And let’s not be mistaken: social peace is an insidious and violent form of the war that is conducted each day against the revolted. It is at the same time the most institutionalized and the most delegated form of the power’s domination. It’s aim is to subject us to social war instead of conducting it against the power and its minions. But it’s a war of every moment and its psychological aspect is probably the most dreadful. By creating its own categories – honest citizen against racailles, legals against illegals, innocent and included against guilty and excluded... — the power has already won an important battle by managing to divide those who, united, could take down its system of death through revolt and insurrection.

Our last illusions are probably those who send us the most to their grinder, whether they are our different comfort zones (community, family, clan, religion) or the internalization of its ideology, which produce snitches, sexists of all kinds, racists, defenders of property rights, suspicious looks, mistrust towards everything that does not fit into their standards or phone calls to the cops instead of dealing autonomously with problems. All of this because some believe it is still possible to live free while delegating our responsibilities to intermediaries, whether they are cops, politicians, religious leaders, or simply while looking the other way towards a foggy dream of an elsewhere where it would be possible to recover from here (drugs, alcohol, prayers, television...).

But in this social war, control is not an abstract concept. It is many names and addresses, thousands of cameras, cops and judges. It is companies who make profit out of our misery (banks, real estate agencies, controllers, bailiffs, supermarkets) or our seclusion (builders, architects, humanitarians, managers). It is social welfare in exchange for our resignation and thus our complicity, active or passive. In many places, social peace crumbles when revolts break out, when individuals stand up and regain their dignity against oppressors. Going from crumbles to explosion solely depends on our will to never bow down again, to never expect anything from them and to fight this world of domination where the true violence lays in the power of the money and the police stick.

This is why, on these few basis, we feel the need to meet around the shared desire to let this rage express itself publicly, as it pleases each and everyone, as a moment among many other. 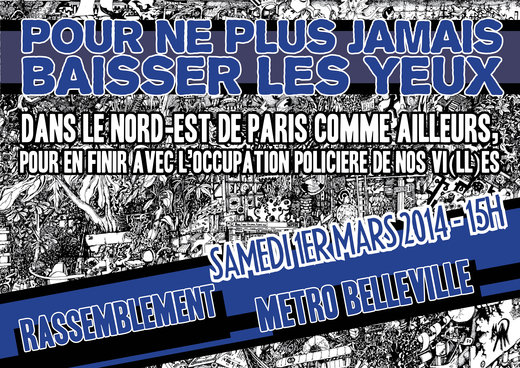 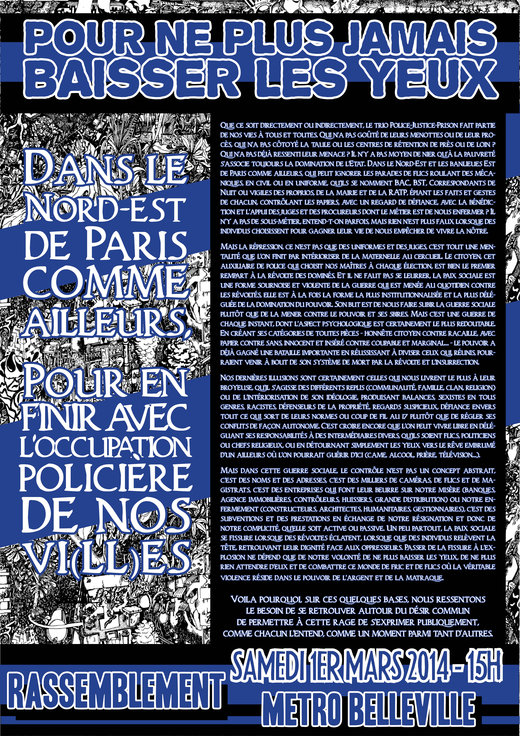